Three years back, a long and lonely Ramadan weekend prodded me to spend time at the vegetable and meat market in Al Ain, UAE. Little did I realize that this weekend trip would spur me on a series of trips spanning next three years to explore the challenge of post harvest losses at various fruit and vegetable (F & V) markets in Lucknow,Berla,Raipur,Chandigarh,Pune and finally culminating at Azadpur mandi,in New Delhi,India.

Each year, India loses thousands of tons of grains, fruits and vegetables to post harvest losses. Post harvest losses are best explained in terms of Food losses, which take place in developing nations where inefficiencies in food supply chain, such as poor warehousing and market infrastructure, logistics, inaccessible markets and exposure to natural elements such as rain, result in edible food being rendered unfit for human consumption. 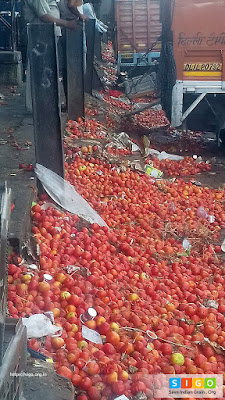 Food waste occurs in developed nations where food is rejected and subject to waste at the retail and or consumer level. Stringent retail standards, bargain discounts and numerous consumer options at supermarket aisles are some of the major drivers for food being subject to waste.

Food supply chain refers to the series of processes such as production, processing, distribution, consumption and disposal, and stakeholders who are involved in the movement of food from our fields to households. 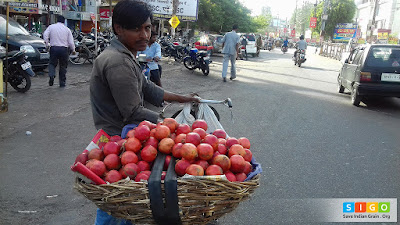 In India, the movement of food from fields to households involves various stakeholders such as aggregators, grain and produce merchants, wholesalers, forwarding agents, transporters, distributors, retailers, vendors and finally to end-consumers. 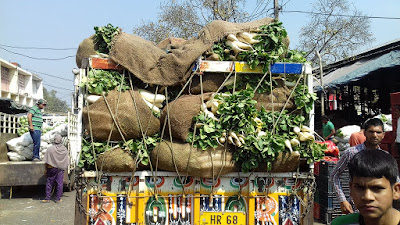 Food moves from farmers to end-consumers in a batch process and money paid by end-consumer moves in the opposite direction to people who were involved in the various stages of the food supply chain. In India, food supply chain operations and processes are predominantly manual, labor intensive in nature and employ women and elderly in last-mile sales. 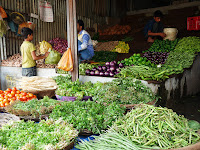 “roughly one-third of food produced for human consumption is lost or wasted globally, which amounts to about 1.3 billion tons per year.”

While agri scientists and experts in the West converge around the FAO study in assessing global post harvest losses, their counterparts in India are of the opinion that food losses are negligible. Such argument stems from their hypothesis that spoiled/ damaged fruits and vegetables are recycled and consumed by the poor sections of the society.

Initially, I found these arguments appalling in nature and dismissed them for lack of verifiable empirical evidence, but my trip to Ch. Hira Singh Wholesale Vegetable Market at Azadpur Mandi in New Delhi compelled me to change my stand. 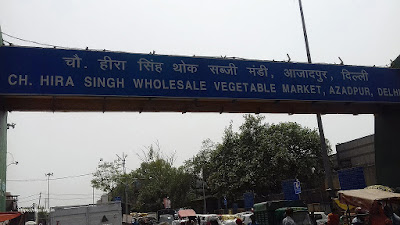 Azadpur Mandi is India’s largest and Asia’s second largest F & V market with a daily throughput of approximately 15,000 MT of fruits and vegetables. Deemed as a Mandi of National Importance (MNI), this prominent F & V market yard has mile-long yards dedicated to the arrivals and Lucknowdispatch of fruits and vegetables and is equipped with facilities such as weigh bridges, auto repair shops, banks, public toilets and garbage pits. Traders have shops and warehouses where produce is held temporarily upon arrival from different parts of the country. 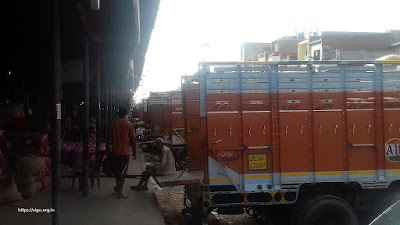 During my visit to this F & V market yard, I observed arrival of pineapples and coconuts from Tamil Nadu, guavas from Raisen, Madhya Pradesh, apples from Kinnaur, Himachal Pradesh, mangoes from Warangal, Telangana, Malihabad, Uttar Pradesh and Gujarat, and large pumpkins from Aligarh, Uttar Pradesh. While some traders were stocking oranges from Egypt, Fuji apples from Shendong, China and Kiwi Fruit from New Zealand, others were participating in auction of lemons and ensuring sold merchandise getting stacked on trucks.

Sadly, docking bays at the onion, tomato and capsicum yards were littered with produce; an old man, women and young boys and little girl were scavenging large open disposal pits to salvage partially edible produce, with stiff competition from bovine residents of the market yard. To make matters worse, a dedicated army of tertiary traders were engaged in recycling and resale of salvaged produce which would eventually find its way to the thousands of food carts in the city.

India’s food supply chains need serious and immediate help with a redesign of prevailing business processes and improvement in infrastructure.

Post harvest losses are an indicator of efficiency within a nation’s food supply chains and my trip to Azadpur mandi inevitably validated the opinions of Indian agri scientists and experts. Post harvest losses result in economic and environmental costs that are detrimental to any nation and India needs to stem these food losses on a war-footing.

“Let us learn to show our friendship for a man when he is alive and not after he is dead.” ― F. Scott Fitzgerald, The Great Gatsby